GAT-1 is a sodium-coupled neurotransmitter transporter responsible for moving g-aminobutyric acid (GABA) across cell membranes. GABA is the predominant inhibitory neurotransmitter in the mammalian central nervous system. GAT-1 is widely distributed in both the central and peripheral nervous systems. GAT-1 and GABA are present in numerous neuronal pathways, some of which are implicated in epilepsy, sleep disorders, neuropathic pain, and attention deficit disorders.

We have constructed a conjugate between an antibody to an extracellular domain of GAT-1 and saporin, the ribosome- inactivating protein. This construct, GAT1-SAP (Cat. #IT-32) has been used to specifically remove GABAergic neurons of the anterior bed nucleus of the stria terminalis (1) and the medial septum and diagonal band of rats (2). Figure 1 shows the specificity of the targeted toxin, with parvalbumin-positive neurons being drastically reduced, while most cholinergic neurons are spared.

Coming soon is our vesicular GABA transporter-saporin construct to increase the ability to eliminate specific populations of GABAergic neurons. 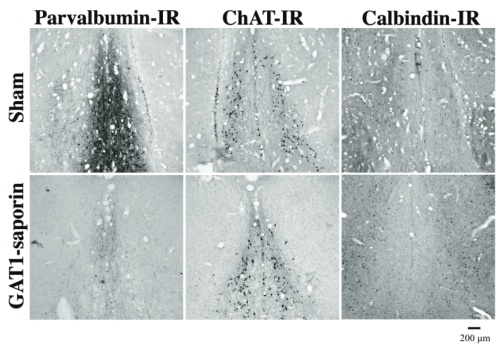