Bombesin is a 14-amino-acid peptide found in frog-skin. The human equivalent, gastrin releasing peptide (GRP) has been detected in itch pathways and plays a role in eating behaviors. GRP regulates numerous functions of the gastrointestinal and central nervous systems, including release of gastrointestinal hormones, smooth muscle cell contraction, and epithelial cell proliferation.

Bombesin-SAP specifically targets GRP receptor-positive cells (Figure 1). All other cells are left untouched. Elimination of cells expressing GPR receptor is useful in studying the role of bombesin in itch and eating behaviors.

Effective Tool: Elimination of cells expressing GRP receptor is useful in studying the role of bombesin in itch and eating behaviors. 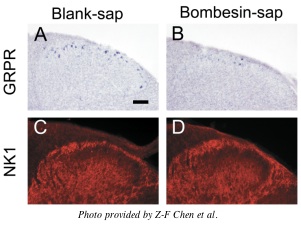 Neuromedin B (NMB) and GRP are two members of the mammalian bombesin family of peptides. These two peptides activate structurally similar but pharmacologically distinct G-protein-coupled receptors. NMB is expressed in a subset of sensory neurons that co-label with calcitonin gene-related peptide and TRPV1, suggestive of a role for NMB in nociception. NMB-SAP removes neurons expressing the NMB receptor. In the periphery NMB and GRP have a wide variety of actions including smooth muscle contraction and exocrine and endocrine functions. In the CNS these peptides regulate food intake and body temperature, as well as stress behavioral responses. Additionally, immunolocalization studies showed that NMB protein is present in the dorsal horn of the spinal cord and expression was also seen in sensory neurons.