There are eight known metabotropic glutamate receptors (mGluR) playing diverse roles in brain function and pathology. They are 7-transmembrane domain receptors involved in learning, memory, anxiety, synaptic plasticity, and pain perception. The ligand for these receptors is glutamate, which functions as an excitatory neurotransmitter. mGluR2 is involved in the inhibition of the cAMP cascade. Potentiation of mGluR2 has recently emerged as a new approach for the treatment of schizophrenia.

Anti-mGluR2 (Cat. #AB-N32) is a mouse monoclonal antibody against a GST fusion protein containing a 47-amino acid sequence from the C-terminal domain of mGluR2. It has been tested in western blot on rat cortical tissue extracts. 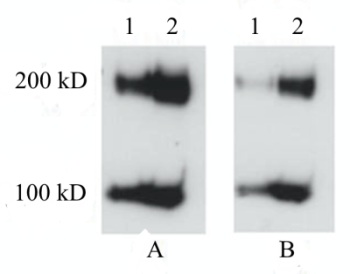 Anti-mGluR2 (Cat. #AB-N32)
Rat cortical tissue extracts were run on SDS-PAGE (5 μg in lane 1, 25 μg in lane 2 for each blot). AB- N32 was applied to blot A at a 1:500 dilution, and blot B at 1:2000. Both blots were incubated with an anti-mouse-HRP secondary antibody at 1:10000. The protein was run under reducing conditions (40 mM DTT), both monomer and dimer forms of mGluR2 are recognized.
Data provided by Marek Schwendt