Unlike pain, itch sensation evokes scratching response instead of withdrawal behavior. However, itch and pain sensations share many similarities. Like chronic pain, chronic itch is a major clinical problem that affects the quality of life of millions of people and the underlying mechanisms are poorly understood. During the past decade, the concept that itch and pain are two distinct sensations has been increasingly appreciated and accepted. Nonetheless, itch-specific neurons are yet to be convincingly identified, raising the doubt about their very existence in the nervous system. In the spinal cord, spinothalamic tract (STT) neurons represent a key station for relaying both itch and pain sensations from the skin to the brain. Using electrophysiological recording, Andrew Craig’s group found that a few mechanically insensitive STT neurons in cat spinal cord responded to histamine but not to mustard oil, a noxious chemical stimulus, and claimed that they represent a central pathway for itch.[1] However, these “histamine-selective neurons” were not examined for their responsiveness to other noxious chemical stimuli, such as capsaicin. Indeed, more recent studies in primates (Glenn Giesler and colleagues) found the itch-responsive STT neurons recorded were all responsive to capsaicin.[2] Therefore, whether there is an itch-specific circuit in the spinal cord remains unsettled.

We previously found that gastrin-releasing peptide receptor (GRPR) is specifically expressed in lamina I of the spinal cord.[3] GRPR is a mammalian homolog of bombesin receptor, and a G-protein coupled receptor. Bombesin is a 14-amino acid peptide that was originally isolated from the skin of a frog, and gastrin-releasing peptide (GRP) is a mammalian homolog of bombesin. We found that mice lacking GRPR showed a significant reduction of scratching behavior to intradermal injection of a variety of pruritogenic (itchy) substances compared with their littermate mice.[3] In contrast, these mutant mice showed normal pain behaviors. Our results suggested that GRPR is important for itch but not for pain sensation in the spinal cord.

Our work on GRPR raised an outstanding question: Are GRPR+ neurons dedicated to itch sensation? The present study was designed to address this question. We took advantage of the fact that bombesin can bind GRPR with a high affinity and become internalized upon binding, and ablated GRPR+ neurons by injecting Bombesin-SAP (Cat. #IT-40) into the spinal cord of mice.[4] After two weeks, we found that up to 80% of GRPR+ neurons were selectively ablated (Fig. 1). Interestingly, injection of bombesin-saporin did not affect expression of NK1 receptor that is expressed in the majority of STT neurons (Fig. 1). Strikingly, mice lacking GRPR+ neurons in the spinal cord showed profound deficits in their scratching behavior in response to several pruritogens, including both histamine-dependent (e.g. serotonin) and histamine-independent ones (e.g. chloroquine). Some mice were unable to scratch at all, no matter how potent the pruritogen (Fig. 2). The scratching behavior of mice treated with Bombesin-SAP was also nearly abolished when an immunotherapy agent called DCP that can cause intense itching in people was used to induce long-lasting scratching (Fig. 2). The scratching deficits of these mice treated with Bombesin-SAP are much more comlete than that of GRPR mutant mice which showed modest decreased response compared with wild-type mice to histamine or histamine-dependent pruriotogens. The lack of scratching responses is unlikely due to motor deficit because these mice showed normal motor function. The most unexpected results are that mice treated with Bombesin-SAP showed normal pain behaviors in response to different types of painful stimuli, including thermal, mechanical and chemical stimuli (Fig. 3). For noxious chemical stimuli, we used formalin, mustard oil, capsaicin and complete Freund adjuvant.[4] Our studies suggest that GRPR+ neurons are itch-specific. Given that NK1 expression is normal in mice treated with Bombesin-SAP and STT neurons are critical for pain sensation, these results suggest that GRPR+ neurons and STT neurons are two non-overlapping subpopulations in lamina I of the spinal cord. Together, we provide the most comprehensive behavioral evidence supporting the idea that there is a neural circuit hard-wired specifically to relay itch sensation in the spinal cord. Identification of itch circuit in mice has important therapeutic implications, because it is now possible to design novel anti-pruritus treatments based on the blockage of the itch pathway without compromising other somatic sensations. 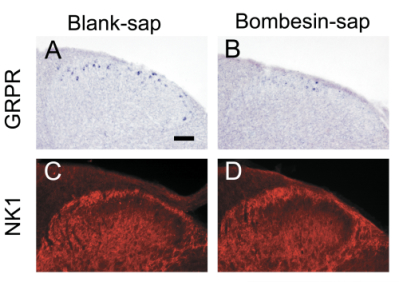 Figure 1. Selective ablation of GRPR+ neurons in the spinal cord.
(A-B) GRPR expression detected by in situ hybridization was significantly reduced in lamina I of mice treated with Bombesin-SAP compared with mice treated with Blank-SAP.
(C-D) NK1 receptor expression detected by immunocytochemistry in the dorsal horn was similar between the two groups.
Scale bar: 100 μm. 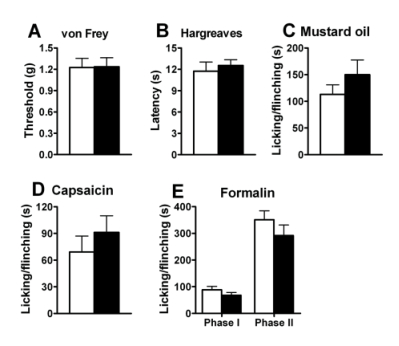