In 2004, ATS re-designed the anti-murine p75-SAP targeted toxin (mu p75-SAP, Cat. #IT-16) and produced a conjugate that is much more potent in our in vitro cell cytotoxicity assays. Previously, we used a rat monoclonal antibody. This antibody had been outperformed by our rabbit polyclonal (Cat. #AB- N01), in several assays, especially flow cytometry analysis of murine p75-expressing cells. This is an important indicator of being able to bind to the cell surface, which is fundamental for a targeted toxin.

To create this toxin, we affinity-purified the rabbit polyclonal (Cat. #AB-N01AP) with the immunogen bound to a solid support, and conjugated the affinity-purified antibody to saporin. As can be seen in the cytotoxicity assay on the right, the new mu p75-SAP is orders of magnitude more potent than the previous conjugate. The new and more active version of mu p75-SAP has an ED50 in the picomolar range compared to an ED50 in the nanomolar range for the previous product. We believe that the greater potency will translate to smaller amounts used for elimination of p75-positive neurons in the mouse brain, and that this will result in a greater index of efficacy and lesser non-specific cytotoxicity. (see cover article for in vivo results).

The mu p75-SAP kit includes, in addition to the immunotoxin, equal aliquots of saporin (Cat. #PR-01), the affinity-purified rabbit polyclonal antibody (AB-N01AP), and the control immunotoxin, Rabbit-IgG-SAP (Cat. #IT-35). 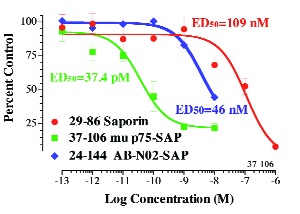 NG3 cells are plated at 1000 cells/well and incubated overnight. Saporin, mu p75-SAP (conjugate of the affinity-purified rabbit polyclonal to mouse NGFr and saporin), and AB-N02-SAP (previous rat monoclonal version of mu p75-SAP) are added in 10-μl volumes and the plates are incubated 72 hours. PMS/MTS developing reagent is added and the plates are incubated 1-2 hours, then read at 490 nm.