A substantial amount of work with Advanced Targeting Systems’ substance P/saporin conjugate (SP-SAP, Cat. #IT-07) has demonstrated that neurokinin-1 (NK1) receptor-expressing neurons in the spinal cord and brain stem are necessary for the full expression of central sensitization following a peripheral injury [1-7]. Eliminating these neurons with SP-SAP suppresses the hyperalgesia (an enhanced sensation of pain) and allodynia (pain to normally non-painful stimuli) associated with the injury, yet, amazingly, leaves normal pain sensation intact. These findings indicate that the NK1 receptor marks an important set of pain processing neurons in the central nervous system and that alterations in their function lead to an enhancement of the pain sensations experienced by an individual.

Studies on the molecular properties of central neurons during chronic pain conditions suggest that activation of several kinases through either enhanced calcium entry into the cells, enhanced internal calcium release or through the stimulation of cAMP production leads to the sensitization of these neurons [8-22]. These studies provide valuable information on the function of the NK1 receptor-expressing neurons, but they require an injury to produce the sensitization, which involves the activation of a large number of molecular pathways simultaneously. To selectively stimulate the cAMP pathway we chose to use cholera toxin. Cholera toxin stimulates cAMP production by ADP-ribosylating Gs, which then stimulates adenylate cyclase [23]. By chemically coupling substance P to the C-terminus of the A subunit (catalytic subunit) of cholera toxin (SP-CTA, Cat. #IT-39) we were able to target the CTA specifically to NK1 receptor-expressing cells [24]. Figure 1 illustrates the uptake of SP-CTA into rat cervical dorsal horn neurons following an intracisternal injection. The section is co-labeled with antibodies to NK1 receptors demonstrating co-localization of the toxin and receptors. The conjugate was not observed in any neurons or cells that did not express NK1 receptors.

In a series of experiments we tested SP-CTA on behavior following intrathecal administration to rats. Doses from 0.3 to 3 µg produced significant sensitization to thermal stimuli on the hind paws of rats 24 hours following the injections. Interestingly, with higher doses the sensitization appeared to be suppressed [24]. These findings suggested that descending inhibitory pathways were activated by the SP-CTA-induced sensitization. Preliminary data indicate that the opioid antagonist naloxone can suppress the descending inhibitory control induced by SP-CTA, exposing profound hypersensitivity to thermal stimuli (data not shown). These findings support the hypothesis that descending control systems are activated by the actions of SP-CTA on spinal cord and brain stem NK1 receptor-expressing neurons.

In summary, SP-CTA is an exciting new tool to examine the function of neurons that possess neurokinin receptors in the central nervous system. The agent selectively enters these neurons through the NK1 receptors and stimulates the production of cAMP for up to three days [24]. As revealed by our studies novel cell functions can be found through this form of selective neuronal stimulation. 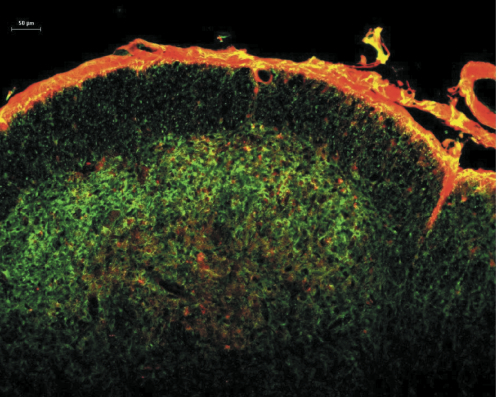 [/twocol_one] [twocol_one_last]Figure 1. Immunohistochemical localization of SP-CTA uptake in the dorsal horn of the cervical spinal cord. SP-CTA (10 µg) was injected intracisternally into rats via a percutaneous puncture under isoflurane anesthesia. One hour later the animals were euthanized and sections (20 µ) of the brain stem and cervical spinal cord were prepared for immunohistochemistry. Immunofluorescence co-labeling for the NK1 receptor (Green) and for the A subunit of cholera toxin (Red) was performed. The cholera toxin subunit was found only in neurons co-labeled with NK1 receptor. Note that at this time point a significant amount of the cholera toxin subunit is still on the surface of the cord.[/twocol_one_last]