Based on these facts, we wished to test if selective lesioning of BFCN during the early stages of amyloid build-up exacerbate tau phosphorylation and produce tangle-like inclusions in transgenic mice with APP mutations. We produced selective immunotoxic lesions of BFCN by injecting the BFCN-specific cholinergic immunotoxin, mu p75-SAP (Cat. #IT-16) which is known to specifically target p75-expressing BFCN. This specific targeting agent was administered intracerebroventricularly in TgCRND8 mice harboring Swedish (KM670/671NL) and Indiana (V717F) mutations. The resulting model exhibited tangle-like inclusions, provoked already existing plaque pathology, and worsened impaired behavioral deficits. The combination of the transgenic mice treated with the immunotoxin provides a powerful tool for understanding AD progression. 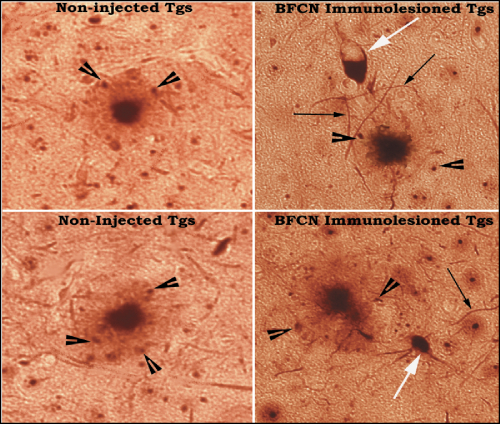 Development of a tangled neuron in plaque vicinity

Note the absence of hyperphosphorylated neuropil threads and “Tangled” neuron in the vicinity of plaque in non-injected Tgs (Left panel).