Cholecystokinin (CCK) is widely distributed in the central nervous system and the gastrointestinal tract. The 33-amino acid peptide contains a carboxyl terminal octapeptide sequence Asp-Tyr-Met-Gly-Trp-Met-Asp-Phe-NH2 which confers the biological activity of CCK, and where the tyrosine residue occurs in sulfated form. This octapeptide, CCK-8(SO3), has high affinity for the two structurally-defined CCK receptor types, CCK1 and CCK2. A covalent conjugate of CCK-8(SO3) to saporin (CCK-8(SO3)-SAP) was synthesized and evaluated for the toxin conjugate’s affinity for the human CCK2 receptors in transfected HEK293 cells (Figure 1). The Ki value of CCK-8(SO3) for the CCK2 receptors was 3.6 nM (log Ki = -8.4 ± 0.09, n = 6), and that of CCK-8(SO3)-SAP was 3.2 nM (log Ki = -8.5 ± 0.02, n = 2). Thus, the conjugation of saporin to CCK-8(SO3) does not significantly alter the affinity of CCK-8(SO3) for CCK2 receptors and should be effective in the targeted-lesion of CCK2-expressing cells by CCK mediated internalization of saporin. Furthermore, based on the saturation analysis of [125I]CCK-8(SO3) for the hCCK1 and hCCK2 receptors, the peptide has similar affinity for the two receptor types (Kd values are 1.9 ± 0.2 nM and 1.3 ± 0.4 nM for hCCK1 and hCCK2 receptors, respectively). It is reasonable to predict that CCK-8(SO3)-SAP has similar affinity for both CCK receptor types, while the non-sulfated CCK-8-SAP is likely to be selective for the CCK2 receptors, albeit with lower affinity (56 nM; see Targeting Trends 4(4):5). It should be noted also that the sulfated group on CCK-8(SO3) may be hydrolyzed upon storage; thus the affinity of the toxin conjugate should be verified experimentally prior to application.

We evaluated the effect of CCK-8(SO3)-SAP on CCK2 receptor-expressing cells in the rostral ventromedial medulla (RVM) of rats by the stereotaxic microinjection of a single dose of CCK-8(SO3)-SAP (3 pmoles, bilaterally at 1.5 pmoles in 0.5 µL per side) into the RVM of anesthetized rats. Separate groups of rats were given the same dose of either saporin or CCK-8(SO3) as control. All animal use and procedures were reviewed and approved by IACUC. Twenty-eight days after the RVM injections, rats were evaluated again for their sensory thresholds to both innocuous and noxious stimuli in the hind paw. Coronal sections of the brain stem containing the RVM were processed for the detection of CCK2 receptor-expressing cells by in situ hybridization using a digoxigenin labeled riboprobe for CCK2. CCK-8(SO3)-SAP pretreatment did not alter the tactile or thermal sensory thresholds in rats when compared to naïve, CCK-8(SO3) or saporin pretreated rats. However, CCK-8(SO3)-SAP pretreatment, but not CCK-8(SO3) or saporin pretreatment, resulted in a significant reduction in the number of cells expressing CCK2 transcripts in the RVM (Figure 2). This reduction in the number of CCK2 immunoreactive cells was seen in serial sections taken throughout the ~1 mm rostral-caudal extent of the RVM, representing a >80% reduction in the total number of labeled cells (p<0.05). There was no evidence of necrosis or significant cell loss in the RVM and surrounding regions of the brain stem. These data suggest that the targeted microinjection of a low dose of CCK-8(SO3)-SAP can significantly reduce the population of RVM cells that express CCK2 receptors.

Acknowledgments
The authors thank Dr. Alan Kopin for the generous gift of the cDNAs for hCCK1 and hCCK2 and Dr. Richard Agnes for the synthesis of CCK-8(SO3). 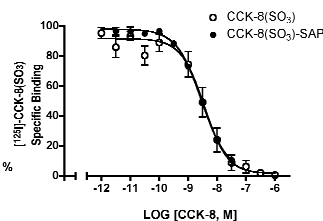 Map of cells that are immunoreactive for CCK2 receptor mRNA on representative coronal sections (20 μm) of the RVM and its adjacent regions of the medulla from rats that have been pretreated with saporin (control, left) or CCK-8(SO3)-SAP (right).

CCK2 receptor mRNA were detected by in situ hybridization using a digoxigenin labeled riboprobe for CCK2. The riboprobe was detected by an anti-digoxigenin Fab (Roche Diagnostics, Indianapolis, IN) conjugated with alkaline phosphatase. The immunoreactivity was detected chromogenically using fast red as substrate. Computer-assisted mapping was carried out using Neurolucida software (Microbrightfield Inc., Baltimore, MD). Each black dot marks the location of a single cell that was labeled for CCK2.

In the left panel, CCK2 immunoreactive cells are localized to the RVM (approximately denoted with dashed red line) and the nucleus gigantocellularis dorsal to the RVM.