We have re-designed the anti-murine p75-Saporin targeted toxin (mu p75-SAP, Cat. #IT-16) and have produced a conjugate that is much more potent in our in vitro cell cytotoxicity assays. Previously, we used a rat monoclonal antibody. This antibody had been outperformed by our rabbit polyclonal AB-N01, in several assays, especially FACS analysis of murine p75-expressing cells. This is an important indicator of being able to bind to the cell surface, which is fundamental for a targeted toxin. We still consider the rat monoclonal (AB-N02) to be an important antibody since it provides an alternative to the rabbit polyclonal.

To create this toxin, we have affinity-purified the rabbit polyclonal with the immunogen bound to a solid support, and conjugated the affinity-purified antibody to saporin. As can be seen in the cytotoxicity assay on the right, the new mu p75-SAP is orders of magnitude more potent than the previous conjugate. We believe that the greater potency will translate to smaller amounts used for elimination of p75-positive neurons in the mouse brain, and that this will result in a greater index of efficacy and lesser non-specific cytotoxicity. 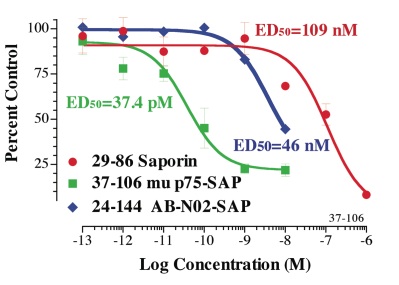