This issue of our quarterly newsletter addresses the use of biotinylated materials in targeting. ATS is now offering a biotinylation service (see p. 7) that gives scientists options for expanding their experimental capabilities. In this first example, Dr. Honda presents data using the targeted toxin IB4- SAP and biotinylated IB4. His laboratory used IB4- SAP to investigate the role of IB4-binding neurons in nociception. 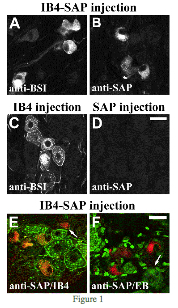 Figure 1 shows ipsilateral dorsal root ganglion (DRG) neurons 3 days after a sciatic nerve injection of IB4-SAP (A, B, E, F), unconjugated IB4 (C), or unconjugated SAP (D). Anti-BSI (Bandaireae simplicifolia I) was used to label neurons that internalize IB4 after a sciatic nerve injection (A and C), and biotinylated IB4 was used to label all IB4- binding neurons regardless of internalization (E). The images were adjusted for contrast and brightness, and double-labeled images were pseudocolored and digitally merged (Adobe Photoshop).

(A, B) IB4-SAP injected into sciatic nerve was detected in DRG neurons 3 days later using anti-BSI (A) or anti-SAP (B). The pattern of staining of the two antisera in neurons was similar. The staining was diffusely distributed throughout the cytoplasm or aggregated in the center of the cell. Labeled neurons had irregular eccentric nuclei and irregular cell perimeters.

(C) Unconjugated IB4 injected into sciatic nerve was detected in DRG neurons 3 days later using anti-BSI. Anti-BSI staining was seen near the cell perimeter and in well-defined puncta surrounding the nuclei of neurons.

(D) Unconjugated SAP injected into sciatic nerve was not detected in DRG.

The majority of anti-SAP-stained neurons were also labeled by biotinylated IB4, as indicated by the presence of red and green puncta in the same neurons. IB4-binding neurons that did not internalize IB4-SAP are shown in green. The arrow indicates an example of disfigured neurons that were positive only for anti-SAP.

(F) Double labeling with anti-SAP (represented in red) and ethidium bromide (EB); represented in green). The neurons containing IB4-SAP were not stained by EB, as indicated by the lack of overlap of red and green pseudo-colored neurons. The arrow indicates an example of the normal appearance of EB staining in sensory neurons. Scale BARS=20 mm.1

This figure demonstrates the internalization of IB4-SAP and its selectivity for IB4-binding neurons.

In Figure 2, IB4, a tetramer isolectin from Bandeiraea simplicifolia, was bound to biotin through an amide bond with a primary amine on the IB4 molecule. After incubation with the biotin, IB4 was run over a desalting column, and sample containing fractions determined by absorbance at 280 nm. A BCA was performed to determine protein concentration, and then binding evaluated through FACS analysis.

Paraformaldehyde-fixed KNRK cells, normal rat kidney cells positive for α-D- galactose, were used for a FACS analysis with the biotinylated IB4 plus avidinylated-SAP (Cat. #IT-09). Cells were treated with biotinylated-IB4 and Avidinylated-SAP, both at a 100 nM concentration, and incubated for 1 hr. Cells were subsequently incubated with FITC-labeled anti-SAP (Cat. #FL-02) at a 1:50 dilution for 30 min. A 99% shift is seen as compared to the non-treated control. 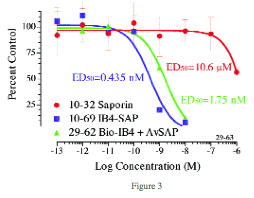 In Figure 3, the biotinylated IB4 was combined with avidinylated-SAP (Cat #IT-09) and compared to the directly conjugated IB4-SAP (Cat # IT-10) in a cytotoxicity assay. KNRK cells were plated at 2500 per well in a 96-well plate and incubated overnight. IB4-SAP, biotinylated-IB4, avidinylated-SAP, and saporin were added in 10-μl volumes, and the plates incubated 72 hours. The plates were developed with PMS/MTS for 1-2 hours, then read at 492 nm in a plate reader. Data analysis was done by PRISM (GraphPad, San Diego).

Results show cytotoxicity levels for the directly conjugated IB4-SAP are 4 times higher than for the biotinylated IB4/avidinylated-SAP. Cells targeted by biotinylated materials will be eliminated using avidinylated-SAP and this is a powerful and economical research tool for scientists in trying to determine the most specific targeting agent for their applications. Potency of avidinylated-SAP may vary according to the specificity and affinity of the biotinylated material to its receptor. ATS recommends the direct conjugation of your material to saporin when the in vitro results confirm the desired specificity.