The major components of plasma membranes are lipids. These molecules have a wide range of functions including cellular structure, metabolism and signaling molecules.  Regarding this last feature, there is a group of lipid species that are distinguished by their involvement in neurotransmission, primarily acting as neuromodulators of other systems.  These specific lipids reach their highest degree of specialization and diversity in the central nervous system (CNS), and could be called neurolipids in the same way that neuronal-specific proteins are called neuropeptides.  The functions of specific neurolipids in the CNS are complex and diverse, and depend on anatomical distribution. The present study describes mapping the distribution of different complex lipid molecules, particularly phospholipids, that are present in cell membranes of neurons and glia in the rat brain. 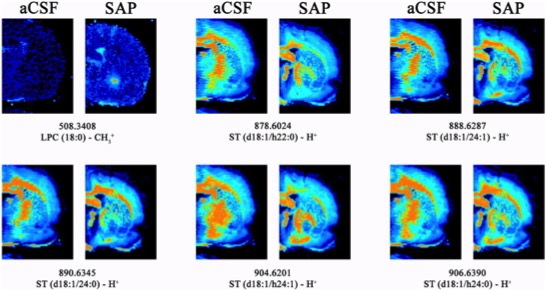 Figure 1:  Coronal IMS images of representative rats corresponding to the NBM lesion model induced by 192 IgG-Saporin (SAP, Cat. #IT-01) compared to the same anatomical level of the control animals treated with aCSF.  Note that all the ST species detected showed a lower intensity in the lesion area, indicating the specificity of lesions to cholinergic neurons.  Moreover, LPC (18:0) was detected with a higher intensity in the lesioned animals.  All of these species were detected in negative ionization, using the following parameters: 150 μm spatial resolution, 10 shots per point at laser fluence of 15–20 μJ.

The rats used to localize lipid species in our model of memory impairment were divided into two groups.  In the first group, artificial cerebrospinal fluid (aCSF) was administered (1 μl/hemisphere).  In the second group, the targeted toxin 192 IgG-SAP (Cat #IT-01) in aCSF (135 ng/1 μl/hemisphere; 0.25 μl/min) was administered.  The intraparenchymal administration was performed in the nucleus basalis magnocellularis (NBM) where the toxin is recognized by cholinergic cells expressing low-affinity nerve growth factor receptor (p75NTR).  When internalized, the toxin (SAP) inhibits protein synthesis, thereby producing specific death of this cell type.

The study results demonstrate that lipids may have specific distributions based on the lipid type and fatty acid component, giving rise to very specific locations in the rat brain related to the physiology of the cells controlling specific functions.  Thus, altering specific lipids involved in the neuropathology of neurodegenerative diseases such as AD could be a good approach for providing new therapeutic strategies.  For all of the above-mentioned reasons, lipids are becoming a family of biomolecules with increasing potential in the development of new therapies for neurodegenerative diseases.