Alzheimer’s disease (AD) is a progressive neurodegenerative disorder that most commonly affects individuals over the age of 65. While of unknown etiology, AD is characterized by a steady decline in cognitive functions including memory, attention, executive functions, and language. There is currently no disease-modifying therapy for the disease, and treatments to date have only yielded modest, short-term symptomatic relief. Recently, the “vascular hypothesis” of AD was proposed, due to the high comorbidity of individuals with cerebrovascular disease (CVD) and AD. These two diseases share similar risk factors and can both lead to dementia, neuronal injury, and neurological dysfunction, suggesting that AD pathogenic mechanisms may involve a dysregulaton of the cerebrovasculature and compromise of neurovascular functioning. However, the potential common mechanisms linking CVD and AD remain unknown.

In this regard, the locus coeruleus (LC) projection system, which provides the sole source of norepinephrine (NE) to the forebrain, mediates attention, memory, and executive function as well as cerebrovascular function and undergoes severe cell loss in AD.1 Furthermore, LC-mediated NE signaling is thought to play a role in blood brain barrier maintenance and neurovascular coupling, suggesting that LC degeneration may impact the high comorbidity of CVD and AD. However, the extent to which LC projection system degeneration impacts neurovascular function in AD is unclear.

To model these relationships in vivo, we stereotactically lesioned LC projection neurons (Fig. 1; Anti-DBH-SAP Cat. #IT-03) innervating the prefrontal cortex (PFC), a major LC projection zone, in the TgF344-19 rat model of AD (aged 6 months old) using the noradrenergic immunotoxin, dopamine-β-hydroxylase (DBH)-saporin or a control Mouse IgG-Saporin (Mouse IgG-SAP Cat. #IT-18; n = 7-9/group). Prior to sacrifice, at 1-month post-op, the rats were tested behaviorally on the Barnes maze task—a special learning and memory paradigm. Rats that received the Anti-DBH-SAP lesion were significantly slower to find the escape cage in the maze (Fig. 2). Additionally, the lesioned rats continued to investigate incorrect holes multiple times showing a deficit in working memory. This behavioral deficit in particular is indicative of LC dysfunction in the PFC. These rats showed no locomotor differences as determined by the open field test (not shown). To continue this study, postmortem PFC will be analyzed for LC fiber innervation, NE levels, and cerebrovascular (cerebral amyloid angiopathy, micro-hemorrhage, cerebral artery endothelial remodeling) and AD-like pathology (amyloid load, tau epitopes, inflammation). We will determine the extent to which CVD and AD pathologic variables correlate with noradrenergic innervation and behavioral outcomes. We hope these studies will elucidate noradrenergic pathways contributing to neurovascular pathology and cognitive decline during the onset of AD and provide therapeutic rationale for targeting LC neuroprotection to modify disease progression. 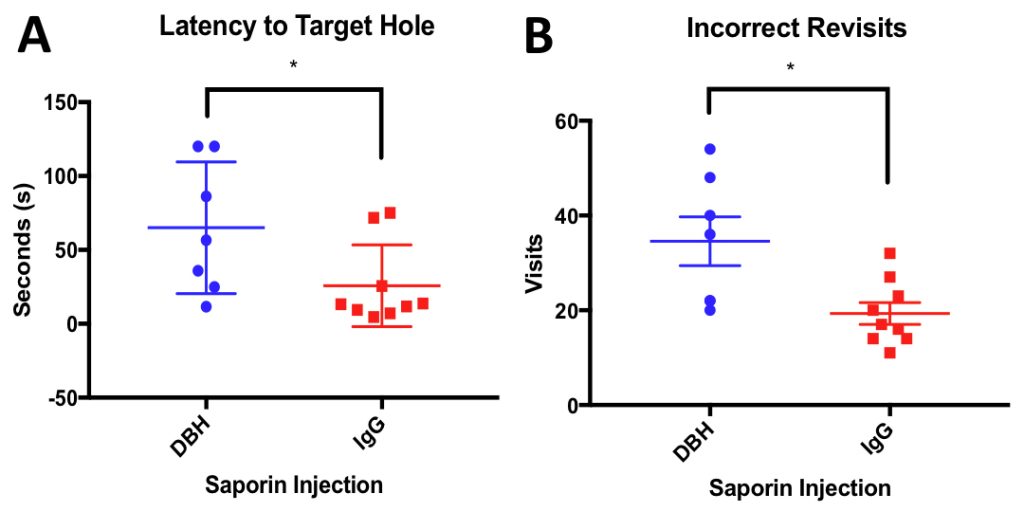