Isolectin B4 (IB4) is a tetrameric protein isolated from Griffonia simplicifolia seeds. Although one of its first uses was the agglutination of B-type red blood cells,[1] it has also been used extensively in the neurosciences because the alpha-galactosyl residues bound by IB4 are present on a variety of cell populations such as the non-peptidergic afferents from the dorsal root ganglia to the spinal cord and subpopulations of somatosensory neurons.[2] Purification of the native protein is a relatively straightforward process, but Griffonia contains 5 similar isolectins, and producing a completely homogeneous lot of IB4 with no contamination of the other lectins is challenging.

The main supply of Griffonia seeds is from Africa, mainly Ghana, Liberia, Togo, and the Ivory Coast. These seeds are also a source of 5-hydroxytryptophan (5-HTP) which is in high demand in the dietary supplement market as an antidepressant, an appetite suppressant, and a sleep aid. As the demand for 5-HTP has gone up, the growers have begun treating the seeds such that they will not germinate, protecting the source of the seeds and the income of the growers. Although 5-HTP can still be purified from treated seeds, IB4 yield is drastically reduced, and the activity is significantly lower than previous lots.

Advanced Targeting Systems has circumvented these issues by cloning IB4 from Griffonia genomic DNA.* The cloned protein is now expressed in E. coli at high levels, and can be purified in a single step – the final product is a homogeneous protein with equivalent activity to native IB4 (nIB4) purified from non-treated seeds (Fig 1). Recombinant IB4 (Cat. #PR-02) has been tested in agglutination assays and as a targeted conjugate in cytotoxicity assays. Work is in progress on variations of IB4 such as a GFP fusion protein for use in staining applications.*

The development of a recombinant version of IB4 will provide a steady supply of highly pure protein that is consistent from batch to batch. This new version of IB4 has been shown to have equivalent performance to the native version and is now available for use (Fig 2).

Fig 1. Coomassie stained NuPage gel of large-scale production of rIB4. After a single-step purification of rIB4 over a p-aminobenzyl 1-thio-β-galactopyranoside agarose column, the resulting product is extremely pure, as seen in Lanes 6-10. It can also be seen that the rIB4 in lanes 3 and 6-10 is smaller than the native IB4 in Lane 2, which is glycosylated. 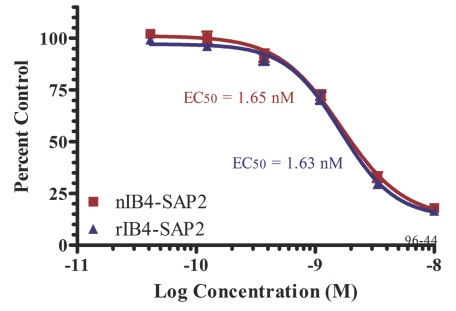