Neurotensin is a 13 amino acid peptide found in the brain and spinal cord (first characterized by Carraway and Leeman1). It affects pituitary hormone release, interacts with the dopaminergic system, and is involved in vasodilation and hypotension. It can also modulate pain perception.

To Terminate or Stimulate? That is the question. . . Here are the tools!

IT-60 Neurotensin-CTA
available individually or in a kit with Blank-CTA (Cat. #IT-61)

When either of these targeted conjugates are administered to cells (in vitro or in vivo), the targeting agent seeks out and binds only to cells expressing neurotensin receptors. The conjugate is internalized.

To Terminate: When using Neurotensin-SAP, saporin breaks away from the targeting agent, and inactivates the ribosomes which causes protein synthesis inhibition and, ultimately, cell death. Cells which do not have the cell surface marker are not affected.

To Stimulate: When using Neurotensin-CTA, the catalytic A subunit of cholera toxin (CTA) breaks away from the targeting agent, and activates the cAMP pathway within the cells by ribosylating adenylate cyclase. Cells which do not have the cell surface marker are not affected. 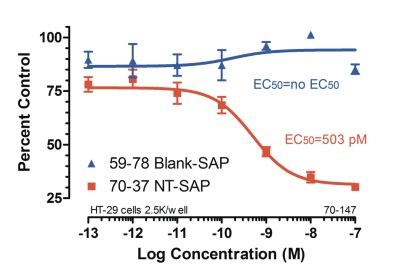 Neurotensin-SAP specifically eliminates neurotensin receptor-expressing cells.
HT-29 cells, a human epithelial colorectal adenocarcinoma cell line, were plated at 2500 cells/90 μl/well in a 96-well plate and incubated overnight. Blank-SAP and Neurotensin-SAP were then added in 10-μl volumes to each well. The plates were incubated 72 hours. Plates were developed with sulforhodamine B then read at 564 nm. Data analysis was done by PRISM (GraphPad).