CD8+ T cells constitute important effectors of the adaptive immune response, functioning principally to remove infected cells from the body, which are detected by the display of short peptides (epitopes) derived from microbial proteins within the binding groove of class I major histocompatibility complex (MHC) molecules on the cell surface. When the T cell receptor (TCR) of a primed T cell binds to its cognate peptide-MHC (pMHC) ligand, the T cell is triggered, and induces apoptosis in the infected cell. To anticipate the potential myriad of pathogen- origin peptides that might be encountered over a lifetime, a correspondingly large, diverse TCR repertoire is randomly generated, with each nascent T cell expressing thousands of identical TCRs of a single specificity. During the subsequent selection process that occurs in the thymus, most T cells bearing TCRs that inadvertently bind MHC molecules presenting “self” peptides (i.e., derived from normal proteins) are deleted prior to entering the circulation, to prevent autoimmunity; the minority of these autoreactive T cells that escape elimination are turned off by peripheral tolerizing mechanisms. In some immune-mediated conditions, such as multiple sclerosis and type 1 diabetes mellitus, normal tolerance is disabled, and autoreactive CD8+ T cells are inappropriately activated, leading to organ-specific tissue destruction and clinical signs of disease. Unfortunately, non-specific inhibition of T cell responses with immunosuppressive agents has not been particularly effective for these conditions, and such drugs carry risks of cancer and serious infections. Selective deletion of the pathogenic CD8+ T cells would appear to be an ideal strategy, but, until recently, there has been no efficient means of targeting just the culprits. In 1996, Altman et al. showed that CD8+ T cells of known specificity could be discriminated from other T cells in polyclonal populations by the use of soluble complexes, widely known as “tetramers,” consisting of four identical pMHC molecules bound to streptavidin.[1] When coupled to a fluorophore, such tetramers permit ready visualization of epitope-specific T cells by flow cytometry.

We and others have shown that, after binding to the TCR, tetramers are endocytosed by the T cell.[2,3] These two characteristics – specific binding and rapid internalization – suggested that tetramers might be a useful way to selectively deliver an intracellularly-active toxin to pathogenic T cells. To investigate this hypothesis, we used TCR-transgenic P14 mice as a source of CD8+ T cells, which recognize a viral glycoprotein-derived peptide, gp33, presented by the class I MHC molecule, H2-Db, and bind to the tetramer, gpC9M. To confirm our observations with a second epitope, we employed TCR-transgenic HY mice, whose CD8+ T cells bind to the H2-Db tetramer, hyC2A. Toxic tetramers were generated from gpC9M and hyC2A pMHC monomers using streptavidin-saporin (SA-SAP; Cat. #IT-27). After assembly, these tetramers retained the TCR-binding specificity of their fluorophore-labeled counterparts, and inhibited translation in a cell-free assay as potently as parent SA-SAP alone.[3] To determine whether T cells would efficiently internalize SAP-coupled tetramers, we briefly cultured quiescent P14 T cells with the gpC9M-SAP tetramer, or as negative controls, with non-toxic gpC9M (not shown) or toxic hyC2A-SAP tetramers. Following the addition of FITC-labeled SAP antibody (Cat. #FL-02), T cells were subsequently incubated at either 37°C or 4°C, which permitted or prohibited endocytosis, respectively. To discriminate internal and external fluorescence, tetramer-antibody-fluorophore complexes on the surface were either removed with an acetic acid solution (“stripped”), or allowed to remain intact (“washed”), prior to analysis. As shown in Fig. 1, acid-resistant fluorescence (gray line), corresponding to endocytosed SAP, was found in all metabolically-active P14 T cells incubated with the cognate gpC9M-SAP, but not with control tetramers. We next evaluated the ability of the SAP-coupled tetramers to kill T cells in vitro. Purified P14 and HY T cells were incubated with either non-toxic tetramers alone; non-toxic tetramers plus free (unbound) SAP; or SAP-coupled relevant or irrelevant tetramers. Surviving cells were identified by exclusion of a membrane-impermeant dye, 7-aminoactinomycin-D, at the time points shown in Fig. 2A. Some cell loss was observed over time with all treatments, characteristic of stimulated, cultured T cells; however, incubation of HY T cells with hyC2A-SAP resulted in the death of 98% of cells within a 3-day period. Free SAP was not toxic to T cells. In vitro killing of these CD8+ T cells by the cognate SAP-coupled tetramers depended on the tetramer dose (Fig. 2B), and the avidity of the tetramer-TCR interaction (not shown).

We then sought to determine if our toxic tetramers could delete specific CD8+ T cells in vivo. Fluorophore-labeled tetramers, when injected intravenously, rapidly bind to cognate T cells in lymph nodes, spleen, and bone marrow, suggesting that SAP-coupled tetramers similarly should be able to reach their targets. To test this hypothesis, we transferred P14 T cells into recipient mice, and after 24 h, administered either gpC9M or gpC9M-SAP. Fig. 2C shows that, after 3 d, >75% of P14 cells were deleted from the spleen in gpC9M-SAP-treated mice; the recovery of control HY cells was not different between treatment groups. At this dosage, injection of the SAP-coupled tetramers caused an acute, mild liver injury, but mice showed no clinical signs of illness.[3]

These studies showed that tetrameric pMHC complexes can be used to deliver a potent toxin, SAP, to epitope-specific CD8+ T cells in vitro and in vivo, leading to deletion of the target population. Such toxic tetramers could represent a novel and effective means for eradicating pathogenic T cell responses in selected immune-mediated diseases.

Artist’s conception of an MHC class I toxic tetramer (illustration: AM Harvey, NCSU-CVM). 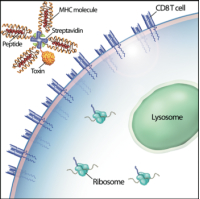 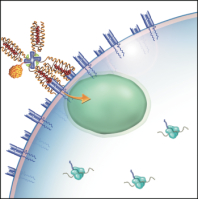 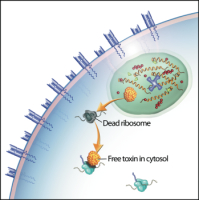 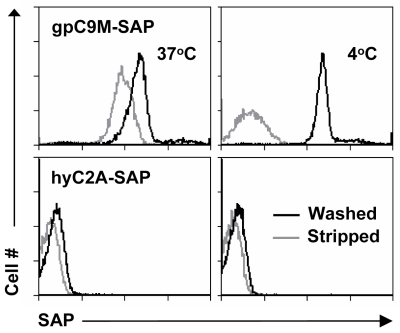 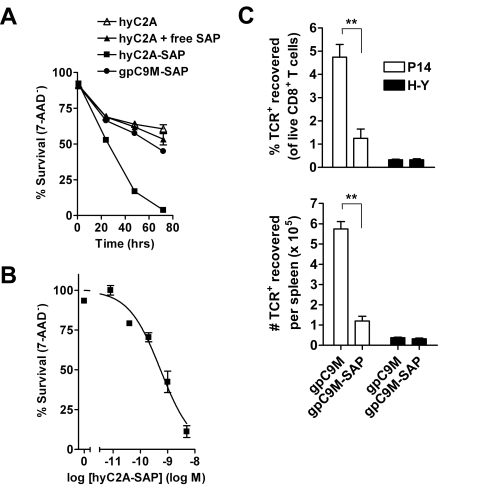 A. Virtually all HY T cells incubated with 5 nM hyC2A-SAP tetramer are killed by 72 h. Neither free SAP nor SAP coupled to the gpC9M-SAP caused cell death above the background seen with non-toxic tetramer.

B. HY T cells incubated for 72 h with varying concentrations (5 – 0.008 nM) of the SAP-coupled cognate tetramer are killed in a dose-dependent fashion.

The top and bottom panels show results as cell % and cell #, respectively.