The nucleus tractus solitarii (NTS) receives afferent input from visceral, somatic and cardiopulmonary structures and is the first central site for the processing of these sensory autonomic signals. Modulation of sensory neurotransmission has been well documented in the NTS. However, the specific role of the neuropeptide substance P (SP) in the sensory neurotransmission in the NTS remains debated. Previous studies have reported that stimulation of somatic and baroreceptor afferents release SP in the NTS and that neural feedback from skeletal muscle depresses arterial baroreflex function by activating local GABAergic NTS circuits. Since baroreflex depression can be prevented by a pharmacology blockade of neurokinin-1 (NK1) receptors, sensory feedback from skeletal muscle may target a local population of NK1 receptor-expressing GABA neurons that selectively inhibit barosensitive NTS neurons.

To address this question, we injected the neurotoxin substance P-saporin (SP-SAP, Cat. #IT-07), that selectively lesions cells expressing NK1 receptors, into the NTS. SP-SAP (1-3 ng in 100 nl) was bilaterally microinjected medial to the solitary tract at the level of the caudal pole of area postrema and rats recovered 5-7 days post injection. Lesions produced a substantial reduction in the number of NK1 receptor-expressing cells in the NTS compared to animals that received either phosphate buffered saline or non-targeted recombinant saporin (SAP) vehicle injections (Fig 1). Importantly, lesions were restricted to the medial and commissural subdivisions of the NTS and extended rostrocaudally from the caudal to the rostral pole of area postrema. The restricted loss of NK1 receptor-expressing cells may have resulted from the relatively low amount of toxin injected combined with its relatively high molecular weight (33kDa). Loss of NK1 cells was accompanied by a significant reduction in the number of GABA neurons in the same region of the NTS (Fig 2). Cellular toxicity was not responsible for cell loss since no group differences were found in the total number of NTS cells when tissue was stained using Neutral Red.

SP-SAP injections reduced baseline baroreflex function by 70% in treated animals. Despite the reduction in baroreflex sensitivity, SP-SAP also abolished the depressive effect of somatic afferent activation on arterial baroreflex function (Fig 3). In sharp contrast, arterial chemoreflex responses (that are transmitted by chemosensitive carotid body afferents of the glossopharyngeal nerve to similar regions of the NTS) were virtually unaltered by SP-SAP treatment.

Taken together, our results suggest that a restricted population of NK1 receptor-expressing GABA neurons participate in arterial baroreceptor signaling in the NTS. The ability of the SP-SAP toxin to selectively target and lesion NK1 receptor-expressing cells within a very limited region has provided a means to further investigate the role of SP on sensory transmission in the NTS. 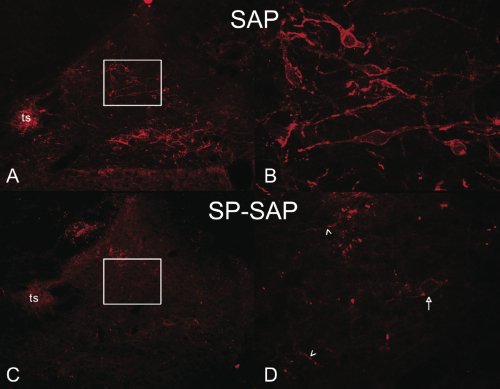 Panel A and C: Cross-sectional image of rat hindbrain containing the NTS at low magnification (4x). NK1 immunoreactivity was highly expressed on cell soma and fibers in regions medial to the solitary tract (ts) of rats treated with non-targeted SAP toxin. In addition, neurons in the dorsal motor nucleus of the vagus also expressed intense NK1 immunoreactivity. In contrast, NK1 immunoreactivity in the NTS was virtually undetectable in rats receiving SP-SAP. 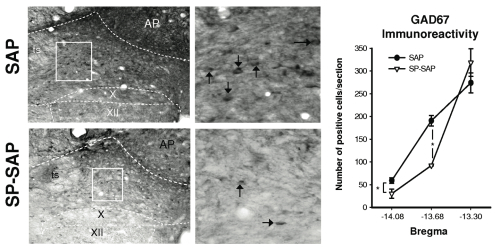 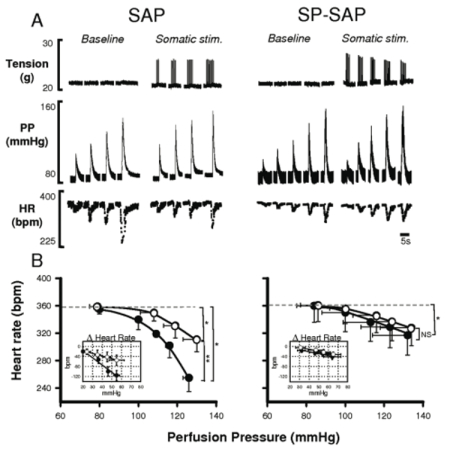