contributed by Jeffrey W. Allen, Ph.D.
The author is currently a Senior Scientist in Emerging Therapies at Medtronic Neurological located in Minneapolis, MN.
There is no association, financial or otherwise, between Medtronic, Inc. and Advanced Targeting Systems.

Substance P-saporin (SP-SAP, Cat. #IT-07) is a targeted neurotoxin that selectively lesions cells containing the Neurokinin-1 (NK-1) receptor. Previous studies in rodents have shown that a single intrathecal injection can prevent formation of chemically induced thermal hyperalgesia and reverse mechanical allodynia caused by nerve injury without altering normal thermal or tactile function. While these results were very promising, it was unclear if SP-SAP would be effective in larger species given the distance the molecule would need to radially diffuse to its site of action, the spinal dorsal horn. With support provided by the National Institutes of Health a series of studies were performed in beagle dogs, a standard large animal model for intrathecal safety. The primary endpoint of this study was designed to determine intrathecal dosing levels in dogs. Secondary endpoints were to characterize the distribution of SP-SAP in the spinal space and to examine effects of an inadvertent intravenous delivery.

Purpose-bred laboratory beagles were surgically implanted with an intrathecal catheter that terminated in the upper lumbar space. All animal studies were conducted in the laboratory of Dr. Tony Yaksh, Dept of Anesthesiology, University of California, San Diego. Animals were allowed to recover for approximately 3 days at which time they received a single 0.3 ml intrathecal bolus of SP-SAP. Control animals received either phosphate-buffered saline (PBS) or non-targeted recombinant saporin (SAP, Cat. #PR-01). Dogs were dosed with 1.5, 15, 45 or 150 µg SP-SAP while dogs in the control groups received 0.3 ml of PBS or 150 µg SAP. Dogs were fully conscious during dosing and behavior was assessed for at least 8 hours immediately following dosing and twice daily thereafter. Catheters were removed about 3 days after dosing to prevent any effects induced by long-term presence of the catheter. Spinal histopathology was assessed at approximately 7, 28 or 90 days. Spinal cords and brain were processed for hematoxylin and eosin (H&E) staining and were evaluated by Dr. Marjorie Grafe in the Department of Pathology at Oregon Health Science Center in Portland. Immunohistochemical staining of the spinal cord for NK-1 receptors, and various markers for cell types and neuropeptides was performed in the laboratory of Dr. Patrick Mantyh, University of Minnesota, Minneapolis. Additional immunohistochemistry of selected brains was done in the laboratory of Dr. Yaksh.

SP-SAP bolus doses of 15, 45 or 150 µg produced an essentially equivalent and significant reduction in the number of NK-1 receptors in the lumbar spinal cord at 28 or 90 days following dosing. Given previous studies it is believed that this reduction was due to death of these neurons, not simply a loss of the receptor protein. No changes were seen in the total number of neurons or the amount of glial fibrillary acidic protein (GFAP), a marker for astrocytes, suggesting a lack of diffuse neuronal loss. Staining for various neuropeptides, including substance P, was unchanged demonstrating a lack of effect of SP-SAP on primary afferent neurons. H&E staining showed no evidence of any histological damage in any animals. Spinal cord sections from SP-SAP treated dogs were indistinguishable from animals receiving either PBS or SAP.

Importantly, all effects of SP-SAP on NK-1 receptor neurons were limited to the lumbar region near the site of injection. This lack of widespread distribution was also seen when examining SAP levels in spinal cord tissues. This localization of effect may be due not only to the relatively large molecular weight of the molecule (33kDa) but also to the short intrathecal half-life of between 30-60 minutes of the active compound.

There was no sign of pain or discomfort during or immediately following injection. In animals receiving either SP-SAP or the control compound SAP, a transient series of behavioral and physiological signs including an increase in blood pressure, tactile allodynia, neck and truncal rigidity with mild rhythmic tremors and bradykinesia occurred. These signs required butorphanol or buprenorphine analgesia in some animals and were generally dose-related with the time of onset being shortest (3-4 hours) at the 150-µg doses. These signs completely resolved over 1-3 days and by 7 days the dogs were indistinguishable from those who received only PBS. It is hypothesized that this acute constellation of signs was a non-specific reaction to the presence of saporin since it was seen in both the SP-SAP and the SAP groups. Since there were no differences in the total neuronal numbers, GFAP levels or H&E histopathology in any of the SAP dogs, it appears these effects were not due to any permanent cellular toxicity.

In summary, these studies demonstrated that a single intrathecal bolus of 15, 45 or 150 µg SP-SAP produced ablation of greater than 80% of the neurons containing the NK-1 receptor in dogs. This suggests a safety factor of at least 10-fold between a fully effective dose, 15 µg, and a dose, 150 µg, that produced unacceptable acute behavioral signs. Behavior quickly returned to normal, and as evidenced by the lack of pathological signs, there appeared to be no long-term detrimental effects associated with SP-SAP administration at the doses tested. The SP-SAP-induced lesioning was spatially limited to the area of the catheter tip without spread to other spinal regions. These studies, for the first time, demonstrate both safety and efficacy, as defined by loss of NK-1 receptors, on intrathecal SP-SAP in a large animal producing the preliminary data necessary to advance SP-SAP to a clinically available compound. 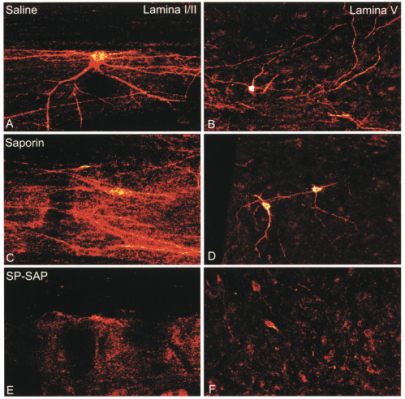 Figure 2. Immunostaining with an antibody to SPR of dog spinal cord after treatment with PBS (panels A and B), SAP (panels C and D), and SP-SAP (panels E and F). Thirty days after injection, animals were sacrificed and cords were removed and processed as described in Mantyh et al.