Hypocretin (or orexin) neurons are located in the hypothalamus and have been implicated in various functions including sleep, arousal and feeding. One area receiving dense hypocretin projections and expressing hypocretin-2 receptors (H-2r) is the medial septum (MS), an area important in learning and memory. In the medial septum, hypocretin-2 receptors are located on cholinergic and GABAergic projection neurons that innervate the hippocampus and other limbic structures. Previous studies demonstrated that activation of H-2r excites both populations of MS neurons. Our studies investigated whether MS neurons that receive hypocretin innervation are important for spatial memory [3].

Male Long Evans rats were administered orexin-saporin (orexin-SAP, Cat. #IT-20) into the MS (0.6 μl) and diagonal band of Broca (DB; 0.4 μl into each DB) at three concentrations: 100, 200 and 300 ng/μl. Following a 2-week recovery period, rats were trained on a water maze task. Each daily session consisted of 6 trials. After behavioral testing, brain sections were stained to visualize cholinergic and GABAergic septohippocampal (SH) neurons using immunocytochemistry for choline acetyltransferase (ChAT) and parvalbumin (PV), respectively.

Rats treated with either 100 or 200 ng/μl were impaired at learning the location of the platform in the water maze (Figure 2). Although mean escape latencies decreased across days for all groups, the rate of learning was slower for rats treated with orexin-SAP as compared to control rats (Figure 2A). Analysis of the first trial of each session was used to assess effects on long-term memory (i.e., 24-hr retention). Rats treated with either dose of orexin-SAP demonstrated a pronounced impairment of long-term memory (Figure 2B). Performance on probe trial for day 4 confirmed the impairments observed on platform trials, but performance on probe trial for day 11 was not different between groups.

In summary, orexin-SAP administered into the MS-DB resulted in a dose-dependent loss of GABAergic and cholinergic SH neurons with a greater damage occurring to GABAergic neurons than cholinergic neurons. Rats treated with 100 and 200 ng/μl of orexin-SAP were impaired in learning the water maze task with pronounced impairment of long-term retention. These results contrast with our previous studies using intraseptal kainic acid administration, which does not impair performance on the water maze or radial maze. The different behavioral results are especially interesting when one considers that 100 ng/μl orexin-SAP preferentially damages GABAergic SH neurons, similar to the damage produced by kainic acid. So far, the effects of these compounds have only been assessed on cholinergic and GABAergic SH neurons. Current studies are attempting to identify the effects of orexin-SAP and kainic acid on non-cholinergic, non-GABAergic MS-DB neurons. Identifying neuronal populations that are differentially affected by these two toxins will help to highlight other MS-DB neurons that may be involved in learning and memory.

In conclusion, these studies demonstrate that orexin afferents to the MS-DB may play a role in modulating memory processes. The results, together with those from previous studies, also suggest an important role of noncholinergic, non-GABAergic MS-DB neurons in spatial memory. 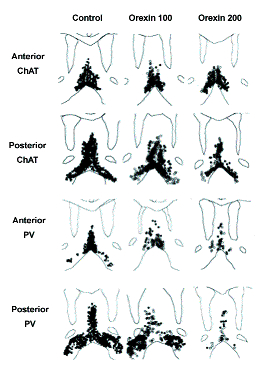 Figure 1. Cholinergic and GABAergic projection neurons in the MSDB region of control rats, and rats treated with 100 ng/μl, or 200 ng/μl of orexin-SAP. The distribution of neurons (closed squares) is drawn for a representative example of the control group. For rats treated with orexin-SAP, open circles represent the distribution of neurons from the rat with the least amount of damage, and the closed circles represent neurons from the rat with the most amount of damage in each treatment group. 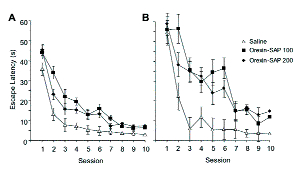 Mean escape latency for daily sessions are shown in Figure 2A. Orexin-SAP significantly impaired the acquisition of a water maze task. No difference was found between the two groups receiving orexin-SAP.