As most of you know, SP-SAP is a potential therapeutic that ATS is developing for use in the elimination of chronic pain. For the past seven years, preclinical studies have been carried out in the rat, safety and dosing studies completed in the dog and the first of two toxicology studies has begun in the rat. The second study is due to start later this year.

SP-SAP works by specifically removing the neurons in the spinal cord that express the Substance P (NK-1) receptor. This represents about 5% of the population of neurons in that area. Administration is through intrathecal injection, similar to the epidural used in childbirth. 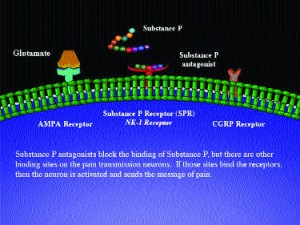 Years ago, when the role of substance P in the transmission of the signal for pain became clear, it was immediately proposed by pharmaceutical scientists to construct analogs of substance P that would block the ability of it to bind to its receptor (see illustration). It was hypothesized that these antagonists would bring about pain relief. However, these analogs have always been disappointing. The reason for this may be that the pain pathway is very important and there are several redundancies; there are several other neurotransmitters, both peptides such as somatostatin or CGRP and smaller molecules such as glutamate, that are involved in transmission of the signal. Hence, blocking one of them is not sufficient; the others step in and take their place.

ATS is actively meeting with pharmaceutical companies to select the right partner to bring SP-SAP to market. There is a great unmet need among people throughout the world who are suffering from chronic pain. SP-SAP could bring these people a better quality of life. With the right partner, SP-SAP could be in clinical trial in a year.