192 IgG-saporin-induced lesions of the posterior NAcc-VP-MS-DB (medium septum-diagonal band) region shifted the cocaine self-administration dose-intake relationship to the left compared to sham-treated controls. Real time RT-PCR showed significant reductions in p75 and ChAT gene expression in the MS-DB and VP with little effect on the caudate putamen (CP) or NAcc of the saporin-treated rats (Figure 2). These data indicate that the net impact of cholinergic neurons in these three brain regions is inhibitory to the processes underlying cocaine self-administration. p75 has been assumed to be a selective marker for cholinergic neurons in the basal forebrain [1] and not associated with other cholinergic interneurons in the CP, NAcc and VP. These findings were based on data obtained with immunohistochemical techniques for p75 that had limited sensitivity for regions where cholinergic neurons are less dense. The real-time RT-PCR procedure used here was more sensitive, permitting identification of p75 in the CP, NAcc and VP. However, whether this low affinity nerve growth factor receptor is associated exclusively on cholinergic neurons in these brain regions is yet to be demonstrated.

These data indicate that cholinergic innervations of the VP and DB are inhibitory to the brain processes that underlie cocaine self-administration. In addition, the nucleus basalis magnocellularis which contains cell bodies for a major cholinergic system innervating the forebrain may also be involved since AMPA-induced lesions shifted the cocaine dose-intake relationship to the left suggesting an enhancement of reinforcing efficacy which is consistent with the role of these neurons in the MS-DB and VP. Discrete intracranial injections of 192 IgG-saporin can be used to investigate the involvement of cholinergic innervations of other forebrain sites where the low affinity nerve growth factor receptor is localized exclusively on cholinergic neurons as is the case for the MS-DB. Identification of the specific cholinergic receptors that are responsible for this shift to the left in the dose-intake function could provide potential targets for the treatment of cocaine abuse. In addition, since drugs of abuse are thought to have addictive properties because they modulate brain systems dedicated to reinforcement and since cholinergic receptors have been shown to participate in the processes underlying brain stimulation reinforcement [2,3], it is likely that some of the cholinergic neurons represent neuronal systems mediating reinforcement in general and thus may have broader applications to understanding the biological basis of behavior. 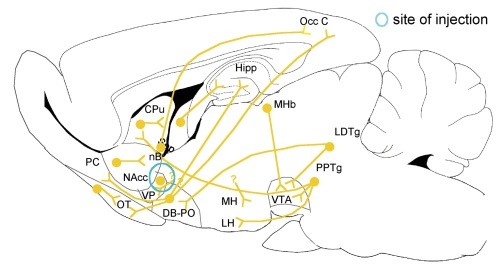 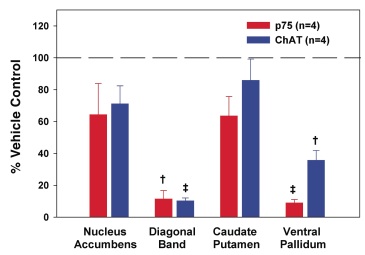 Figure 2. p75 and choline acetyltransferase gene expression. p75 and choline acetyltransferase gene expression in four brain regions of four pairs of rats intravenously self-administrating cocaine that received either 192-IgG-saporin or sham vehicle treatment into the posterior nucleus accumbens-ventral pallidum. The diagonal band of Broca and the ventral pallidum showed significant decreases in both.