Muscarinic cholinergic receptor activation in entorhinal cortex (EC) activates intrinsic depolarizing membrane currents, which cause self-sustained spiking activity in single neurons.[1] This effect may underlie delay activity and match-dependent activity changes in delayed match to sample tasks[2] and could allow accurate maintenance of novel information without dependence on synaptic modification associated with previous exposure (familiarization). Consistent with this, research in human subjects suggests that the medial temporal lobes are specifically activated during working memory for novel but not familiar stimuli,[3] and cholinergic deafferentation of the rhinal cortex in non-human primates has been shown to impair memory for trial-unique (novel) stimuli.[4] The current study tests the hypothesis that cholinergic deafferentation of the EC produces impairments in working memory for novel, but not familiar stimuli.

Methods: Prior to surgery, Long Evans, male rats weighing between 300-350 grams were presented with 10 trials/day of an odor-based delay non-match to sample with a subset of odors chosen from a total of 30 odors until reaching criterion performance at a zero delay (8/10 correct for 2 consecutive days). Subjects were then subdivided into two groups. Half received infusions into the entorhinal cortex of 192 IgG-saporin (Cat. #IT-01), a targeted toxin that destroys cholinergic afferents and the other half received vehicle infusions. After a two-week recovery period, rats were tested to re-establish criterion performance at the zero delay. Tests of varying delays with these “familiar” odors (3,15,60,180 minutes) or with varying list lengths (3,5,10,15) were then given. These testing conditions were counterbalanced across subjects. After completing testing with familiar odors, rats were tested with novel odors (6 trials, 15-min delay). On day 2, a replication was run with an additional set of novel odors (6 trials, 15-min delay). Novel odors were then repeatedly trained over four additional days/list so that they became familiar.

Results: Lesioned rats showed a loss of ~60% of the cholinergic afferents in the area of the EC relative to sham-lesioned rats as assessed by fibers counts of the acetylcholinesterase positive (AchE+) fibers in the area (Fig 1 A, B, C, D). Damage was centered on the lateral EC.

Rats with lesions of the EC were significantly impaired on tests with novel odors as shown in Fig 2. The initial impairment in the processing of novel information was highly correlated with the extent of damage to caudal portions of the lateral EC (Fig 3). The novel odors were then familiarized over days of training using a unique testing sequence for each day. The impairment in the working memory of novel odors persisted over the second day of training but dissipated by day 3 with lesioned rats’ performance stabilizing by days 4 and 5 (Fig 4). Lesioned rats were not impaired at any delay (up to 180 min) when tested with familiar odors (Fig 5). Sham-lesioned animals showed comparable impairments in performance when tested with novel stimuli or long lists of items to remember (Fig 6) suggesting these tasks were similarly difficult. Rats with EC lesions were only impaired in tests with novel items suggesting an increase in task difficulty alone was insufficient to explain these impairments. These data support the hypothesis that cholinergic afferents to the EC activate cellular mechanisms of sustained spiking activity necessary for maintenance of novel, but not familiar stimuli in a working memory task. 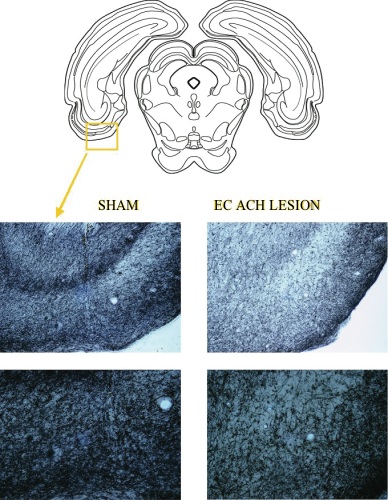 Figure 1. Acetylcholinesterase-positive fibers in the area of the EC (Bregma –7.3) for SHAM (A, C) and EC lesioned rats (B, D) at low and high magnification. The lesion produced a loss of approximately 60% of AChE fibers throughout the EC with damage centered on lateral EC. 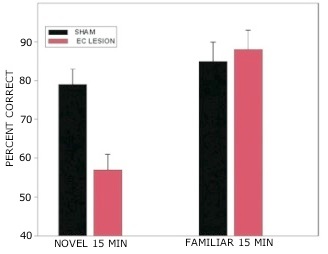 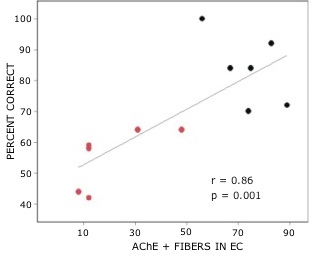 Figure 3. The number of AChE + fibers in the EC was strongly correlated with the accuracy on tests of DNMS with novel items. EC rats are shown in red with SHAM represented by black dots. The behavioral data shown here are the same data as shown in Fig 2. 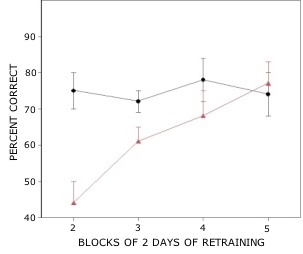 Figure 4. Novel items were retested over subsequent days. The performance of EC-lesioned rats (red line) improved significantly over days of testing so that there was no difference in performance between the groups by day 3 of testing. Though two lists of novel items were tested, performance did not differ on these two tests so data are combined over the lists to form blocks of testing as indicated on the ordinate. 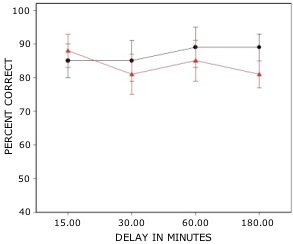 Figure 5. EC lesions (red line) did not impair memory for familiar items even when extremely long delays (180 min) were imposed between sample and choice. Accuracy is shown on the ordinate with delay in minutes on the abscissa. 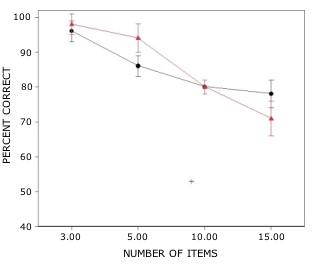 Figure 6. Lesions of the EC (red line) did not impair memory of familiar items even when task difficulty was manipulated by increasing the list of items to be remembered. Note: decrease in accuracy in SHAM rats under these conditions is similar to that produced by the introduction of novel test items so that the EC rats’ impairment on tests of DNMS with novel items cannot be explained by an increased sensitivity to the difficulty of the task.