OX7-SAP is a cytotoxin to many types of neurons. It is one of the most potent of the saporin immunotoxins— the conjugates between a cell surface antibody and the ribosome-inactivating protein from Saponaria officinalis. The reason for the potency could be due to the construct’s grand tradition. The antibody, OX7, is one of the original antibodies to cell surface proteins produced by England’s Medical Research Council, the famous MRC of Crick, Perutz, Brenner and many others. This antibody was made by injection of rat white blood cells for immunization and recognizes CD90 or Thy 1. Thy 1 is expressed on virtually all neurons after cessation of axonal growth.1 The mouse monoclonal recognizes rat and mouse Thy 1. Figure 1 illustrates analysis by flow cytometry of PC12 cells with OX7 and demonstrates a remarkable shift.

To the neuroscience community, OX7-SAP has a distinguished career. It was used by Ron Wiley and his colleagues in the first applications of immunotoxins in the nervous systems. He used it as a “suicide transport” agent, in which the injection is at a terminal site with the purpose of eliminating the cell that projects to that point through uptake at the terminal, transport to the cell body and eventual death by protein synthesis inhibition.2 He also used OX7-SAP by intraventricular injection for the subsequent removal of Purkinje cells.3 OX7-SAP has been used by numerous investigators in variations on this theme. The immunotoxin has also been used to deplete mouse blood of T lymphocytes, because these also express Thy 1.4 (See the ATS website for a complete list of references.) 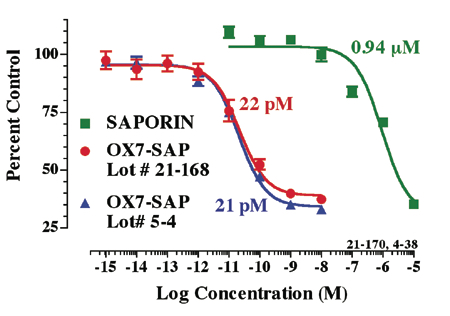 [/threecol_two] [threecol_one_last]Figure 2. Cytotoxicity of two different lots of OX7-SAPand of non-conjugated saporin (SAP) to PC12 cells in culture. Cells were plated at 5000 cells per well and allowed to acclimate. Samples were added at the indicated concentrations and cells were incubated for 72 hours. MTS (Promega) was added and, after color development, wells were read with a Molecular Dynamics SpectraMax 340. ED50’s of each compound are color-coded. Data analysis is by PRISM by GraphPad. [/threecol_one_last]

Figure 2 shows the cytotoxicity of OX7-SAP to PC12 cells in culture. There is a greater than 4 orders of magnitude difference between the non-conjugated saporin and the OX7-SAP which is targeted to PC12 cells because of their Thy 1 expression.

For an excellent discussion on the many applications for OX7-SAP in lesioning of neurons, see the recent review by Wiley and Kline.5