IB4, or the B4 lectin isoform from Bandeiraea simplicifolia (Griffonia simplicifolia), has played an important role in the delineation of the pathways of pain transmission. One of the two major groups of primary afferents that target the spinal cord dorsal horn neurons are labeled by IB4; the other group by TrkA and peptides such as CGRP and substance P and TrkA (Snider and McMachon, Tackling pain at the source: New ideas about nociceptors. Neuron 20:629-632, 1998).

ATS has designed a reagent that can eliminate in vivo the IB4- labeled neurons by conjugating the lectin to saporin. This reagent has begun to yield important information about pain pathways.

Upon binding to the alpha- glactosyl group expressed on the cell surface, IB4-SAP becomes internalized and saporin inhibits protein synthesis, resulting in the elimination of the neurons. The cytotoxin is extremely potent, with an ED50 of 80 pM for alpha- galactosyl-expressing cells in vitro. For an excellent discussion of these two classes of primary afferents, see Basbaum AI. Distinct neurochemical features of acute and persistent pain. Proc Natl Acad Sci USA 96:7739-7743, 1999. 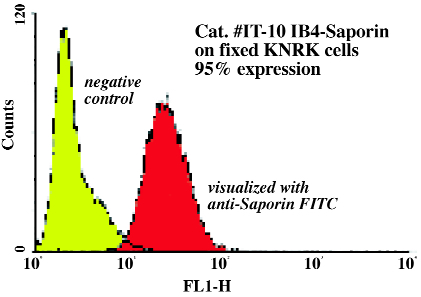