Contributed by Dr. Ann Schreihofer, University of Virginia, contributes this issue’s article from the laboratories of ATS customers. Dr. Schreihofer summarizes her research with anti-DBH-SAP (Cat. #IT-03) to immunolesion specific rostral ventral medulla neurons that project to the spinal cord by injection of anti-DBH-SAP into the rat spinal cord. The toxin is taken up and retrogradely transported to the cell bodies, eliminates protein synthesis and causes cell death. She examines the effect of neuronal loss on sympathetic nerve activity and arterial pressure.

The rostral ventrolateral medulla (RVLM) is an essential structure for the generation of the sympathetic tone that maintains arterial pressure (AP) and for the generation of many sympathetic reflexes. Spinally-projecting C1 neurons, whose firing characteristics resemble those of recorded sympathetic nerves, are located in the RVLM. These cells have been speculated to be the critical presympathetic neurons. However, the RVLM also contains non-catecholaminergic neurons whose properties suggest they may have an important role in the generation of sympathetic vasomotor tone. The relative roles of the C1 and non-C1 bulbospinal RVLM neurons have been difficult to determine. Until recently the selective depletion of either class of presympathetic neuron was not possible because the C1 cells are insensitive to classic catecholaminergic neurotoxins, such as 6-hydroxydopamine, and a marker for the non-C1 cells has not been identified. The recent development of the immunolesioning tool, saporin conjugated to an antibody for dopamine beta hydroxylase (anti-DBH-SAP), has provided an effective tool for examining the effects of the selective elimination of the catecholaminergic bulbospinal RVLM neurons.

We depleted bulbospinal C1 cells in rats by microinjection of anti-DBH-SAP bilaterally into two levels of the upper thoracic spinal cord (21 ng/100 nl/injection; 4 injections/rat). To directly examine the depletion of the bulbospinal RVLM neurons we also injected the retrograde tracer Fast Blue into two alternate levels of the spinal cord in some rats. This protocol produced an average depletion of >74% of bulbospinal C1 cells (range, 50-95%) and several other bulbospinal catecholaminergic cell groups (84% of C3 cells and 98% of A5 cells).[1,2,3] After 3-5 weeks these rats have a normal mean AP, and a sympathetic nerve activity (SNA) that continues to be modulated by baroreceptor inputs,[1,3] although the range of this reflex is reduced.[1] Stimuli that inhibit SNA and decrease AP, such as intravenous phenyl biguanide1 or clonidine,[2] appear to be unaffected by treatment with anti-DBH-SAP. In contrast, stimuli that increase SNA and AP, such as intravenous cyanide1 or electrical stimulation of the RVLM itself,[3] appear to be markedly reduced or absent after treatment with anti-DBH- SAP. These data suggest that the non-C1 bulbospinal RVLM neurons may be sufficient to maintain the basal SNA that maintains resting AP; however the C1 cells may be critical for the full expression of sympatho-excitatory responses mediated by the RVLM. 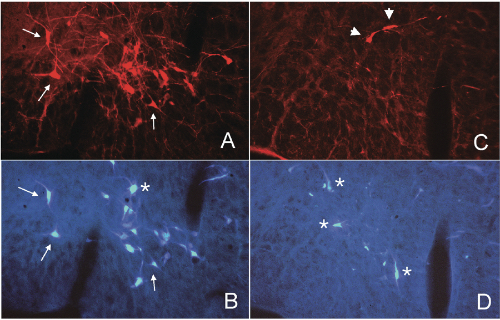 Figure Legend: Depletion of bulbospinal C1 adrenergic neurons with intraspinal injection of anti-DBH-SAP. (A) Phenylethanolamine-N-methyltransferase-immunoreactive (PNMT-ir) neurons in the RVLM from a rat after intraspinal injection of a control toxin, saporin conjugated to a mouse IgG, showing an abundance of C1 cells. (B) Same area of section in A showing many C1 neurons retrogradely labeled from intraspinal injection of Fast Blue (Arrows). (C) PNMT-ir neurons in the RVLM from a rat treated with anti-DBH-SAP showing a massive depletion of bulbospinal C1 neurons. Arrowheads indicate C1 cells with no Fast Blue, suggesting these are not bulbospinal. (D) Same area of section in C showing neurons retrogradely labeled with Fast Blue. Asterisks indicate bulbospinal neurons that are not C1 cells, which are spared by treatment with anti-DBH- SAP. The ventral surface of the medulla is at the bottom left of each photomicrograph.